We require your assistance to free Alaa


As you may have heard at this point, Egyptian Blogger Alaa Abdel Fatah has been captured nearby 10 others while showing in backing of the autonomy of the Judiciary in Egypt and the arrival of past demonstrators who were kept 2 weeks prior. The Police ensnared them, cordoning off their quiet dissent and afterward moved ahead to handpick the demonstrators that they needed to keep, beat them, and after that captured them. 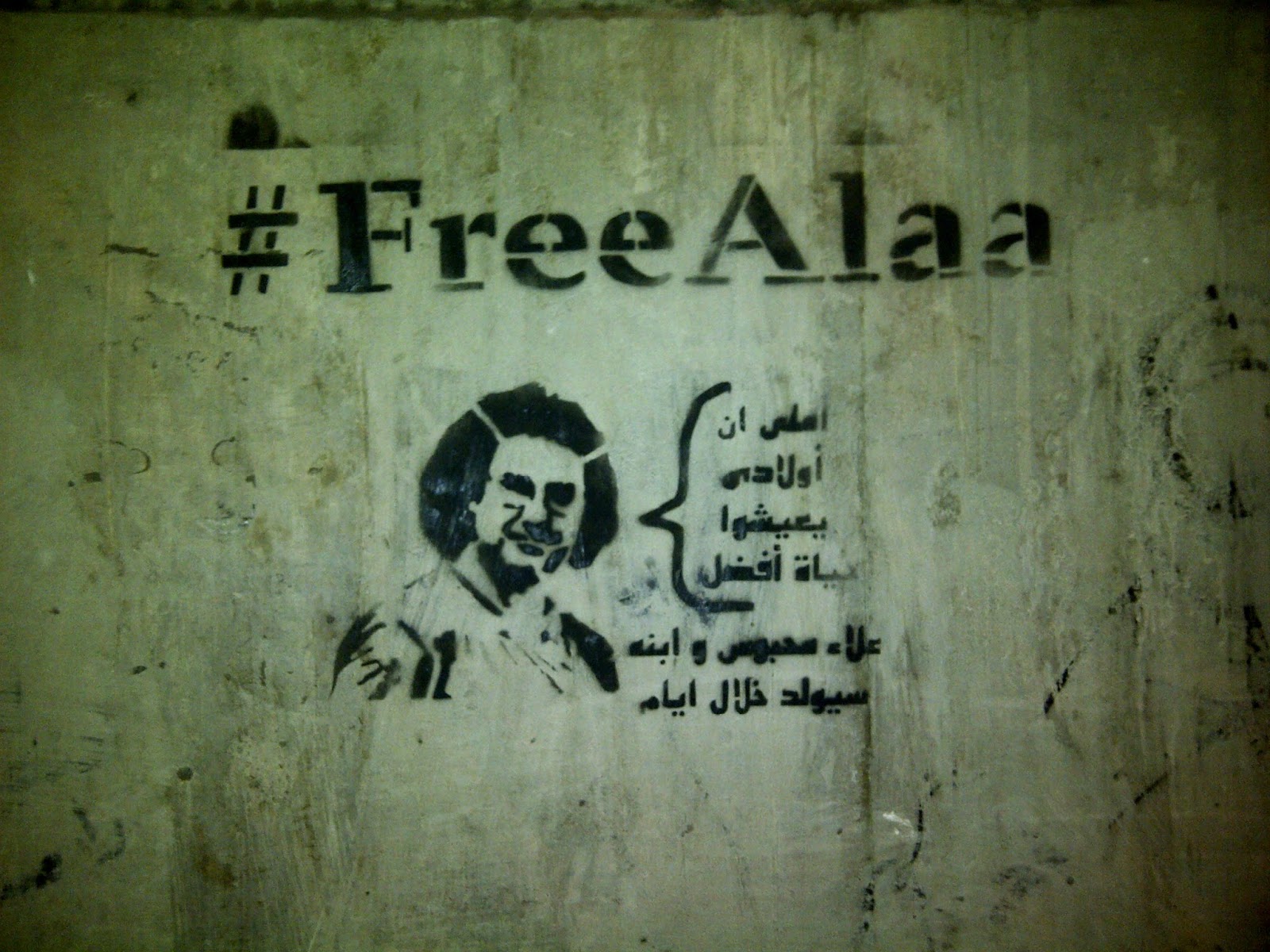 Alaa and those captured with him are currently captured for 15 days "pending examination", which could be reestablished inconclusively if the state so wishes. He and the men were sent to the scandalous Torah Prison and the young ladies to the Qanatir jail for the length of time. This makes them barely protected, in light of the fact that stuff that goes ahead in Egyptian detainment facilities on the hands of the jailors: beatings, rapes, torment of various types.

At present there are around 48 kept, 6 of them are bloggers, and 3 of them are ladies. The best known is Alaa, which makes him the posterboy of this crusade - yet getting them out is just as essential. Egypt has less than 830 bloggers all things considered, 60 of whom are political and short of what 30 are politically dynamic. Presently 6 of those are in prison - 20% of all politically dynamic Egyptian bloggers - and amongst them one of Egypt's most profoundly profiled one.

This is in no way, shape or form a co-frequency. Government operators handpicked individuals to capture from amongst the dissidents. They have been needing to get Alaa for quite a while now, unequivocally on the grounds that he is prominent, and on the grounds that he aides composes the dissents and spread the data through the website aggregator he runs (www.manalaa.net). With Alaa gone, Aggregator could close down without his support and different bloggers could persuade excessively terrified to be dynamic and discover no real way to arrange or achieve one other. It's of essential imperativeness that he gets discharged ASAP.

Alaa is a mainstream popular government dissident, and a resolute promoter of opportunity, free discourse and human rights. He composes shows and takes part in challenges against assorted types of treacheries in Egypt and is the champ of the worldwide Best of the Blogs grant from Reporters Without Borders last December.

Alaa was captured while dissenting to backing Egypt's Judges battle for autonomy. 2 weeks prior he had composed a "National Unity" challenge to show solidarity with Egypt's Christians who endured a partisan assault on 3 houses of worship on Good Friday. Prior to that he was one of the few voices that urged quiet and serene dialog while the cartoon emergency was hitting its crest. He is a frantically required voice of balance and vote based system in Egypt, and one of the few glints of trust in a nation whose future appears soil between the smashing guideline of the administration and the devotion of the Islamist restriction.

Addresses for the Egyptian international safe havens in the US and Canada are accessible here, formats for messages to be sent to the government offices here, and the contact data for the individual to email in the US state division is here. On the off chance that you are a columnist or know one, help us spread the saying by expounding on this or requesting your neighborhood daily paper expound on this. In the event that you have an online journal or a site and might want to bring issues to light about this issue, pennants for the Free Alaa fight could be found here and here. We could utilize any help we can get, so in the event that you have any thoughts or approaches to help us, kindly do.

The Sandmonkey
Posted by Dana Willie at 21:33 71 comments:

Den is the name of two alike planetary romance imaginary characters created by Richard Corben. Richard Corben is an American illustrator and comic book artist well known for his comics featured in Heavy Metal magazine. He is the winner of the 2009 Spectrum Grand Master Award. In 2012 he was voted to the The Will Eisner Award Hall of Fame.+

The first character appeared in the 1968 animated short film Neverwhere. The second has been showing in the medium of comics since 1973, and in short stories that have been collected for the most part in trade paperbacks. The second character Den also came out in the animated film Heavy Metal.
Posted by Dana Willie at 05:56 34 comments:

He keeps a much lower profile than his younger brother, Gamal, and is not involved in politics. Within the family, under his half-British mother, his name is 'Alan', while his brother is 'Jimmy'.
Alaa attended St. George's College, Cairo for his early education; then he graduated from the American University in Cairo. He is married to Heidy Rasekh, and the couple have two sons: Muhammad and Omar. Muhammad died on 18 May 2009, aged 12, after suffering a 'severe health crisis' (a brain haemorrhage).

Just before his father's resignation Alaa had a bitter argument with his brother Gamal Mubarak. He reportedly told him "Instead of working to help your father be honoured at the end of his life, you helped damage his image this way," The two brothers almost came to blows and senior palace officials had to interfere in order to cool down both men.

On 13 April 2011, Alaa was imprisoned for 15 days pending investigations for corruption, abuse of power, and for his alleged role in causing the fatalities and casualties of peaceful protesters during the Revolution.
Posted by Dana Willie at 03:00 82 comments:

Alaa Abd El-Fattah (Arabic: علاء أحمد سيف عبد الفتاح‎, IPA:  also presented in English as Alaa Abdel Fattah) is an Egyptian blogger, software developer, and political activist. He is known for co-founding along with his wife Manal Hassan, daughter of activist Bahi El-Din Hassan, the Egyptian blog aggregator "Manalaa" and "Omraneya", the first Arab blog aggregators that did not restrict inclusion based on the content of the blog. In 2005 the "Manalaa" blog won the Special Reporters Without Borders Award in Deutsche Welle's Best of Blogs competition. He has been active in developing Arabic-language versions of important software and platforms.
Posted by Dana Willie at 05:41 8 comments:

(New York, May 10, 2006) – Egyptian security officials arrested 11 more political reform activists, including an award-winning blogger, Alaa Ahmed Seif al-Islam, Human Rights Watch said today. This brings to more than 100 the number of people detained over the past two weeks for exercising their rights to freedom of assembly and expression.
Approximately half of those arrested are members of the Muslim Brotherhood who were putting up posters and distributing leaflets protesting the April 30 extension of emergency rule for another two years. The Emergency Law has been in effect since President Hosni Mubarak came to power in October 1981. The others were detained for demonstrating in support of a group of judges campaigning for greater judicial independence.

The latest arrests occurred on May 7 near the South Cairo Court where activists arrested on April 24 were scheduled to appear before a judge. Police released three of the 11 new detainees, but transferred the remaining eight to the Heliopolis state security prosecutor, who extended their detention for 15 days. The eight still detained are: Ahmed `Abd al-Gawad, Ahmed `Abd al-Ghaffar, Alaa Ahmed Seif al-Islam, Asma’a `Ali, Fadi Iskandar, Karim al-Sha`ir, Nada al-Qassas and Rasha Azab.

On May 8, authorities extended for another 15 days the detention of a dozen activists arrested on April 24. They initially faced charges of blocking traffic, but the authorities later transferred their cases to state security prosecutors. Yesterday, authorities extended the detention of 28 activists arrested on April 26 and 27 for another 15 days. All those arrested between April 24 and May 7 for demonstrating now face charges of “insulting the president,” “spreading false rumors,” and “disturbing public order” under the parallel state security legal system set up under the Emergency Law.

According to a statement published on an activist Web site, activists detained between April 24 and 27 have begun a hunger strike to protest prison conditions, including threats of torture and ill-treatment.

“The activists detained over the past two weeks should be released immediately, unharmed,” Stork said. “The Egyptian government is responsible under international law for their safety.”

The campaign of judges for greater judicial independence has become a rallying point for political reform activists. The Judges’ Club, the quasi-official professional organization for members of the judiciary, refused to certify the results of last year’s parliamentary elections after more than 100 of the judges reported irregularities at polling stations. In February, the government-controlled Supreme Judicial Council stripped four of the most vocal judges of their judicial immunity.

For the names of demonstrators detained prior to May 7, please click here.

One cherished memory from my youth was sitting with my cousins singing an old African-American spiritual, ” When Israel was in Egypt’s land” which retells the events in the Old Testament of the Bible (Exodus, chapters 3-12), in which God commands Moses to demand the release of the Israelites being held in Egypt. The song was made famous by Paul Robeson whose voice, deep and resonant as it was, conveyed the authority of the voice of God before Moses in Egypt.
This is how the song goes:

Perhaps someone could re write the song for the 21st century. I’m thinking something along the lines of:
When bloggers were in Egypt’s prisons
Let our people go
Oppressed so hard they could not stand
Let our people go

Something like that, yeah I know the lyrics are not that good, in my defence however, it is early on a Tuesday morning. For some proper lyrics you should head over to mshairi’s.